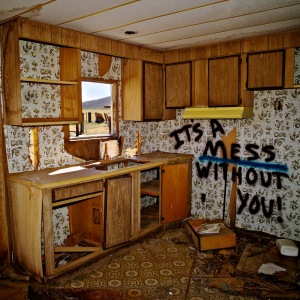 First printed: 2014  I had been photographing the abandoned trailers at this site for four years before capturing this image. The same room appears in an earlier photograph “Desert Kitchen – Cinco, CA – 2010” before the sink was pried out and some unknown person or persons were moved to add this memorable inscription to the scene. As a documentary photographer, I can only bear witness to the aftermath of such events, wondering like you, who may have spray-painted the note, in what circumstance, and for what intended audience. Whatever the author’s intention, this image has caught the imagination of a wide range of people on a personal level, leading to rampant, engaging speculation as to the full story. The large-size print edition is on its way to selling out, but a smaller-size edition is available as well.
Desert Window – Cinco, CA – 2010: www.ospix.com/desert_windows/e1d236a9f Boom: a Journal of California – Framing the Desert – Summer 2015 West Hollywood Lifestyle Magazine – Premiere Issue – Winter 2014 Solo Exhibition – Los Angeles Art Association/Gallery 825 – 2014
The Life of Things – SCA Project Gallery – Pomona, CA – 2014
KCET Artbound: High & Dry – A Collaboration Surveying the American Desert – May 21, 2014