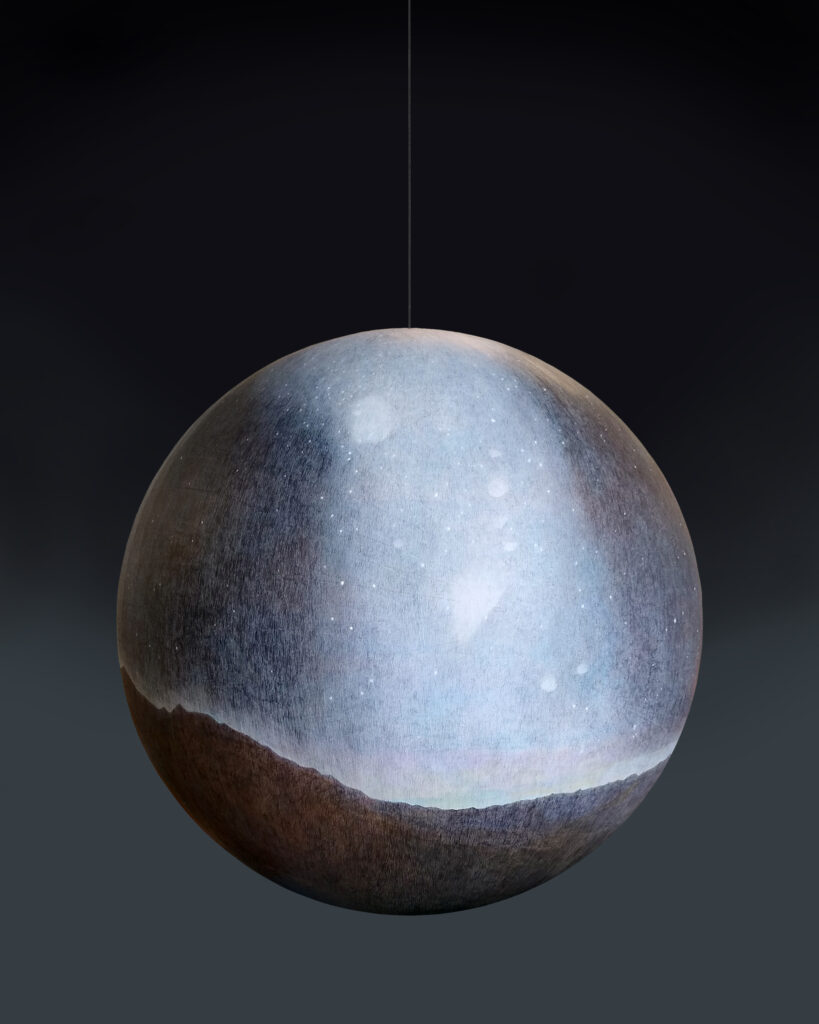 Since 1990, Russell Crotty’s vast body of work challenges the preconceptions of drawing as primary medium, exploring and expanding the notion of “works on paper” and pushing the genre towards minimal sculptural installation. His practice chronicles an idiosyncratic commentary on astronomy, landscape, and the natural and manmade world, resulting in an extensive oeuvre of drawings, collages, paintings, large-scale books, and drawings on paper-coated suspended globes.

The globes are fabricated in fiberglass, covered with archival paper by paper conservators, then drawn on directly with a special archival ballpoint pen over a wash of gouache. Installation of these works create a decidedly calm and optimistic spacial experience with universal appeal across borders and cultures. Their grand presence creates a circular space in which one feels they can look into another world – an invitation to take a journey into the western landscape and our local universe.

As a serious amateur astronomer, Crotty has studied the night sky for decades, utilizing his own array of telescopes with occasional sojourns to professional observatories. He has made important observational contributions to accredited astronomy organizations such as NASA and ALPO (Association of Lunar and Planetary Observers). He obsessively and enthusiastically documents the night sky and celestial phenomenon. The resulting body of astronomical work is informed by the scientific research of contemporary astrophysicists, romanticized by his extensive knowledge of exploratory 19th century science, and fueled by his immense passion for the cosmos.

Direct physical engagement is at the heart of the work, with on-site field notes made in sketchbooks. Those observations are then translated into drawings on globes, in large books, and on panoramic works on paper. Crotty’s ruminations on his experiences are expressed through fields of text, a hybrid of rant and prose. At times, he employs found text, at other times, a diatribe using the vernacular of the locality he’s engaging. In all cases, the text serves as not only as a formal drawing element denoting strata and volume, but as a discourse of his fixation on place, turf and bearings.

Crotty’s drawings and globes are singular episodic fragments of the natural world. They are a collection of seemingly small yet momentous moments: wanderings on abundant Los Padres trails; camping under star-strewn skies; scrambles amongst roughened boulders asking to be climbed; detours down the back roads of bucolic California ranch lands; or gazing at stars setting over jagged peaks as silhouettes of the ridges west of Ojai deepen at dusk. These experiences fill his mind with images and words that ponder an ever-growing concern for the uncertain future of the natural world, increasingly threatened by encroaching overdevelopment… an urgent desire arising to capture the landscape before it’s gone. How does the artist grapple with the reality of this degeneration yet hang on to the poetry of the moment?