History of the Porch Gallery 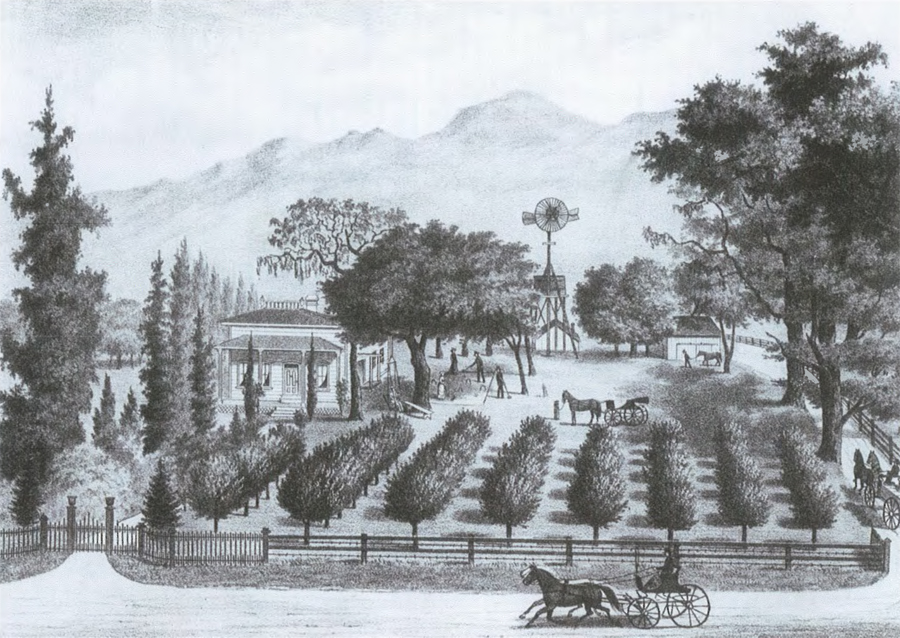 The Porch Gallery Ojai is located in a historic building in downtown Ojai at 310 E. Matilija Street.

Historic Background on the Montgomery House:

John Montgomery arrived in San Buenaventura from Santa Barbara during the summer of 1874 in search of a healthier environment for his ailing wife, Jacobita.
“Grander than any map painting was stamped on nature’s great canvas, the dense oak forest; the perpetual play of sunshine through the foliage; the towering mountains; guardians of the rustic beauty below; and above all the balmy breath of life soothing the tender tissue of throat and lung.” He went on to say that after arriving in the Ojai Valley, his wife never had another attack of asthma. He would often say, “The Ojai Valley is the Best Place in the World.”

In December of 1874, Montgomery procured 1,300 acres of land. Ancient Oaks spread their branches above it, the nesting place of hundreds of birds who filled the air with their songs.

In front was an acre of orchard – a casual orchard with a dozen kinds of fruit and with gnarled old olive trees along the fence. The front walk, traversing the orchard area, was bordered rather austerely by enormous eucalyptus. These trees had been planted in the early 1870’s, at the time when the house was built, soon after settlers had begun to find their way into the Ojai area. Previous to that period, the Valley had ben a Mexican land grant. It had been used then only for grazing, and was known as Rancho Ojai. West of the house was an acre of vineyard. On the east, an oval driveway, circling a flower garden, gave access to the house by way of the side entrance.

There were berry and vegetable patches, the chicken yard and corral. A random assortment of buildings included woodshed, a laundry, a work shed for carpentry, a barn with carriage house attached, and, of course, an outdoor privy.

When it was purchased by the Baker family, Helen Baker Reynolds went on to say “to my infant mind, our home was enchanting, especially out of doors. Something exciting and wonderful always was going on — currying the horses, gathering eggs, cutting alfalfa with the scythe, storing persimmons or pears in the cellar, stacking hay in the barn. Best and most exciting of all was irrigating the orchard. What a thrill of delight to hear the engine in the windmill house come to life with coughing and wheezing, a sign that soon water would be feeding its way down the ditches between the orchard trees, making streams delightful for wading!”

“Unexpected arrangments in interior design were reflected in our dwelling’s odd exterior. The house popped out in all directions, two stories high in one place (when later some upstairs bedrooms and another bathroom were added); one story in others. There were strange excrescences here and there — big porches and little porches on every side of the house, with steps up onto the porches and down into the cellar. The older rooms had tall, narrow windows, the new ones, shorter and broader. It was very nearly ugly enough to claim a sort of charm. At any rate, one can state with confidence that there was no other house just like it.”