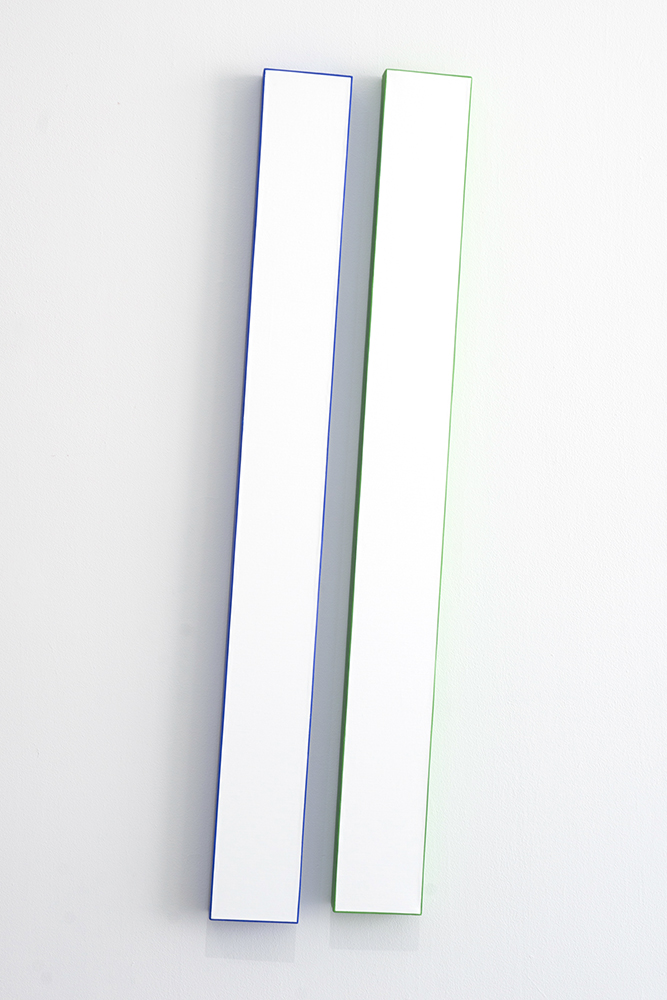 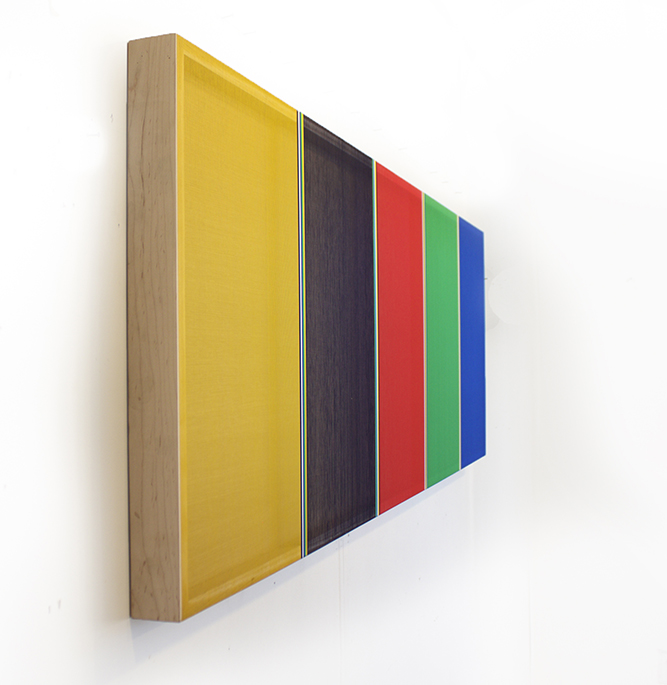 Porch Gallery Ojai presents Front | Side: Selected Works by Deborah Salt and Brian Wills. Like a chef simultaneously achieving a savory and sweet delicacy, Salt and Wills straddle the fine line of minimalism paired with a complex visual palette. At first glance the works appear duo-chromatic, constructed of blocks of color devoid of shading. As the viewer moves around the pieces, the colors glow and intensify with each new step and angle.

Salt applies thick pigment to the sides of her works leaving the front of the canvases stark white or black. The room’s ambient light ignites the color causing it to radiate out from the piece, making the traditionally passive walls conspirators in the artwork. The paintings are installed “tipped” on their sides, giving them added movement and breaking the customary static horizontal and vertical fields.

On the other hand, Wills’ wall sculptures, constructed of rayon thread wrapped around wood boxes, are hung in concise grids. When viewed head-on, the thin strands of thread wrapped around the structure with obsessive craftsmanship, devour light and flatly expose the architecture of the box. The gaps in the thread reveal the infrastructure of the piece to the viewer. When viewed from the side, the slits disappear, causing the colors to pop and magnify to extreme density. The box that once seemed empty and bare magically appears to be filled with a neon light.

Born in Los Angeles, Deborah Salt grew up in New York, where she studied at the Arts Students League and the School of Visual Arts. Formative influences include artists and thinkers of 1970 Soho including Brice Marden, Chuck Close, Jonathan Borofsky, Steve Reich, and Marcia Tucker. Salt moved to Los Angeles in 2003, where she continues to live and work today. She has exhibited since the mid-70s in New York, Los Angeles and internationally.

Brian Wills (b. Lexington, Kentucky) holds both a JD and SSP from Harvard University (1995) and BA from Denison University. Wills has exhibited both nationally and internationally. Most recently, he was listed by Artsy.net as one of the 20 best booths at the 2017 Armory Show. His work are included as part of the The Jarl Mohn Family Foundation, the Dallas Price Van Breda collections and the Palm Springs Art Museum. Wills lives and works in Los Angeles.