“I like to encapsulate the mood so there’s something about the camera work that transcends the miniature. I’m always trying to do that. Can we transcend this little space and open it up?“
— Jamie Caliri 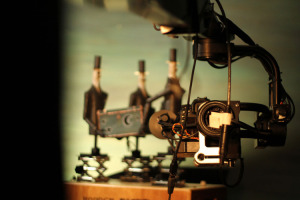 Jamie Caliri is an award winning title designer and animation director with a passion for visual storytelling. Caliri’s award winning animation commercials, title sequences and music videos utilize a unique combination of live action, stop motion, and cinematography techniques that have been described as an “otherworldly magic show” (Motionagrapher, 2013). Under the Gun Review observed that, “Caliri creates a stop-motion animation world of eerie figures and landscapes to make us think outside the box.”

Caliri’s projects include The Shins, A Rifle’s Spiral, Lemony Snicket End Titles, and United States of Tara titles (for which he won an Emmy). Porch Gallery Ojai is proud to present a mini-retrospective of Caliri’s 25 year career. In addition to props and storyboards employed to create his works, the Gallery will feature nighttime projections of his most popular videos and commercials. Limited edition prints of film stills will also be available.

Jamie Caliri currently lives and works in Ojai. Caliri is currently working on the upcoming animated film version of “The Little Prince” to be released in late 2015.