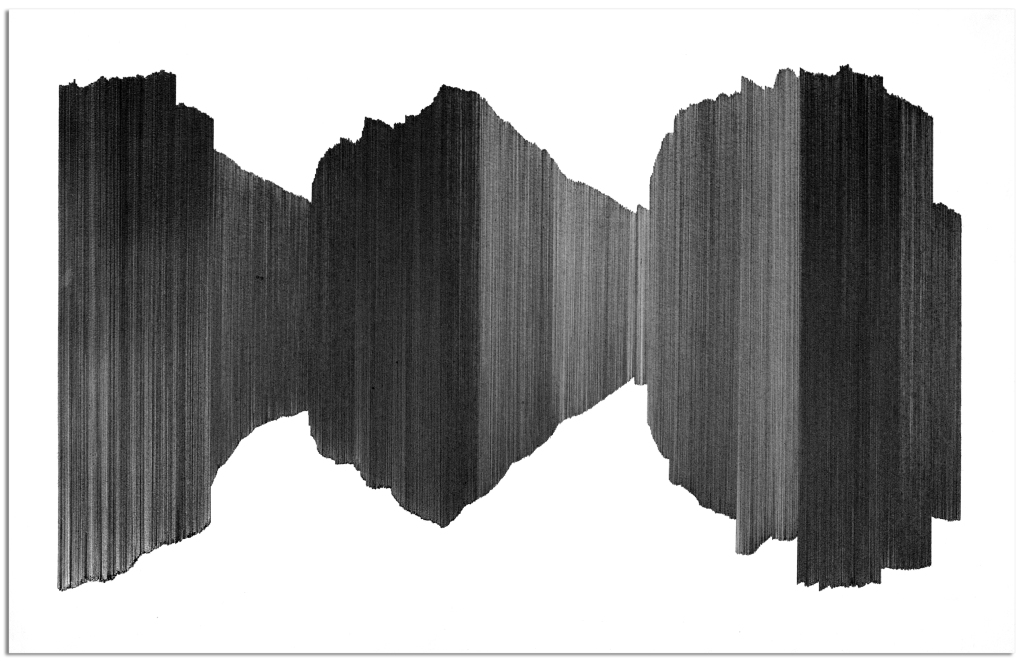 China Adams, from the series A Certain Period of Time, graphite on paper

Whether measuring a fictional rattling of the earth’s core or creating spore-like pods that radiate out of the walls, tables and ceiling of the gallery, both Abarbanel and Adams have the ability to create life-like motion out of static materials.

Adams’s pieces from her series “A Certain Period of Time” are created with meticulous hand-drawn lines of varying length and density. As a group, these lines create a marker for the passage of time and movement with the exactitude of a calibrated machine. Like marks from a seismic counter, the resulting forms grow and oscillate on the paper building graphic depth from systematic process.

Abarbanel, on the other hand, starts with precise machine-cut wood forms and hand assembles them with organic fluidity. His pieces, like “Reef 09”, mirror the wabi-sabi effect of exploding spores and the indiscriminate growth of nature. In Abarbanel’s hands, the passage of time is marked by a birth of randomness; what begins in a state-of-the-art machine, blooms, and ends in a form of fluid beauty.

Born in 1970 in San Francisco, China Adams has lived in Los Angeles for over twenty years. She earned a BFA from UCLA (1995) and an MFA from the University of Nevada, Las Vegas (2000). She has been featured in exhibitions around the world, including several solo shows at Ace Gallery, Los Angeles and Steve Turner Contemporary, Los Angeles. Adams makes conceptual art works in a range of media.

Joshua Abarbanel received dual undergraduate degrees in art and psychology from the University of California at Berkeley and a Masters of Fine Art from the University of California at Los Angeles. Abarbanel’s work was the focus of a solo exhibition in 2014 at Hinge Parallel Gallery (Culver City, California). Two sculptures from his Reef series were included at the Fleming Museum of Art (Burlington, Vermont) in the group show In Grain: Contemporary Works in Wood (2015). He has been commissioned by the Jewish Museum Berlin to create a large-scale sculpture for their fall 2016 exhibition, Golem, and a new body of work inspired by his recent shipboard residency in the Artic Circle will appear at the Berkshire Museum (Pittsfield, Massachusetts) in early 2017. Abarbanel lives and works in Santa Monica, California.