Porch Gallery Ojai presents Shana Mabari: Oceans. In 2020, Los Angeles-based contemporary Light and Space artist Shana Mabari became the first artist-in-residence on a maritime mission lead by the non-profit Sea Shepherd Global, the world’s leading direct-action ocean conservation organization. For five days, Mabari sailed their vessel M/Y Bob Barker off the west coast of Africa, a clandestine operation part of Sea Shepherd Global’s ongoing efforts to combat illegal, unreported, and unregulated fishing in the waters of Benin. It resulted in the arrest of a trawler illegally fishing in protected waters just outside an important ecological reserve. Work inspired by this journey comprises her upcoming solo exhibition “Oceans,” opening at the Porch Gallery in Ojai on Saturday, March 26 with an artist’s reception from 4-6PM.

Mabari says. “I am beyond grateful to everyone at Sea Shepherd Global for the opportunity, in particular to the organization’s Director of Campaigns Peter Hammarstedt, who saw the unique potentials of embedding an artist onboard one of their missions.” Mr. Hammarstedt and other Sea Shepherd Global officials will be present at the March 26 opening.

Artworks to be featured in Mabari’s “Oceans” series include “Korāl” sculptures, and circular “Horizōn” pieces, all acrylic. The Korāl installation comprises more than 60 free-standing sculptures in varied colors including red, blue, violet, yellow, and orange. They range from 7 to 14 inches in height, creating a coral reef inspired environment in the gallery that aims to bring awareness to the devastation of coral reefs throughout the oceans, and highlight their remarkable underwater elegance. Horizōn is a series of eight 15-inch wall-mounted disks.  They reference the elemental meeting of sea and sky, the same horizon line used by early mathematicians and astronomers including Ptolemy and Galileo to accurately measure the planets and constellations in the night sky. Ten-percent of proceeds from exhibition sales will benefit Sea Shepherd Global.

Also inspired by Mabari’s Sea Shepherd Global residency is the new book OCEANS, a collection of essays curated by the artist and accompanied by images of her “Korāl” sculptures. It will be published in April 2022 in a limited edition of 100, each signed and numbered by Mabari. The book is a collaboration with Sébastien Montabonel of Alaska Editions, based in London, UK.

Mabari’s Sea Shepherd Global residency builds on her commitment to expand her practice to engage with disciplines beyond traditional art-world boundaries. It follows up her 2018 voyage as the first artist to fly aboard a mission of NASA’s Stratospheric Observatory for Infrared Astronomy (SOFIA). The groundbreaking aircraft uses a 2.7-meter telescope mounted in a customized 747 – flying to a maximum altitude of 45,000 feet – to study astronomical phenomena including black holes and star formation. Artworks inspired by SOFIA were first exhibited at the Lancaster Museum of Art and History in early 2020.

Sea Shepherd Global’s Hammarstedt says, “Shana’s work brings to bear a distillation of intense personal experience confronting the awesomeness of things we human beings struggle to comprehend, whether the outer reaches of space or the vastness of ocean depths. Yet there is a sense of connection, too—and that sense of connection is vital if we are to take action collectively against the ecological crises that imperil ocean wildlife and our planet as a whole.”  To date, the organization has been responsible for the arrest of more than seventy pirate vessels, through its use of innovative direct-action tactics and its unique partnerships with the governments of Benin and a number of other coastal African nations.

Mabari’s engagement with color, light, reflection, and geometric form are on a continuum that connects with the Light and Space movement that originated in California in the 1960s. Central to Mabari’s process is an ongoing investigation into the intersections of art and science, as evidenced by her sculptures, installations, and immersive environments that explore the dynamics of visual perception and the ways in which we experience physical space. Ongoing, her practice is informed by how the worlds of art-making and technological advancement transform our collective field of vision and understanding of the universe.

Founded in 1977 by Captain Paul Watson in Vancouver, Canada, Sea Shepherd Global is an international, non-profit marine conservation organization that engages in direct action campaigns to defend all marine wildlife, and conserve and protect the world’s oceans from illegal exploitation and environmental destruction. Today the movement has independent entities in more than 20 countries, working together on direct-action campaigns around the world. In its ongoing work, Sea Shepherd Global investigates and documents when laws to protect the world’s oceans and wildlife are not enforced – they expose and confront illegal activities on the high seas, in marine sanctuaries, and in countries’ sovereign waters through cooperative agreements with established law enforcement agencies.

Born in Los Angeles, CA, Shana Mabari has traveled extensively, and has lived and worked in Paris, Northern India, Ibiza, and Tel Aviv.  Her education includes studies at the École Nationale Supérieure des Beaux-Arts de Paris and Otis College of Art and Design in Los Angeles.  She holds a patent for the design of “Dynamic Spatial Illusions,” a portable version of a visual and sensory experimental environment. She is a recipient of the Center for Cultural Innovation ARC grant. Mabari’s overall body of work is in the continuum of the Light and Space tradition that began in Southern California in the 1960s. In addition to her studio practice, Mabari is known for her large-scale illuminated public art installations. 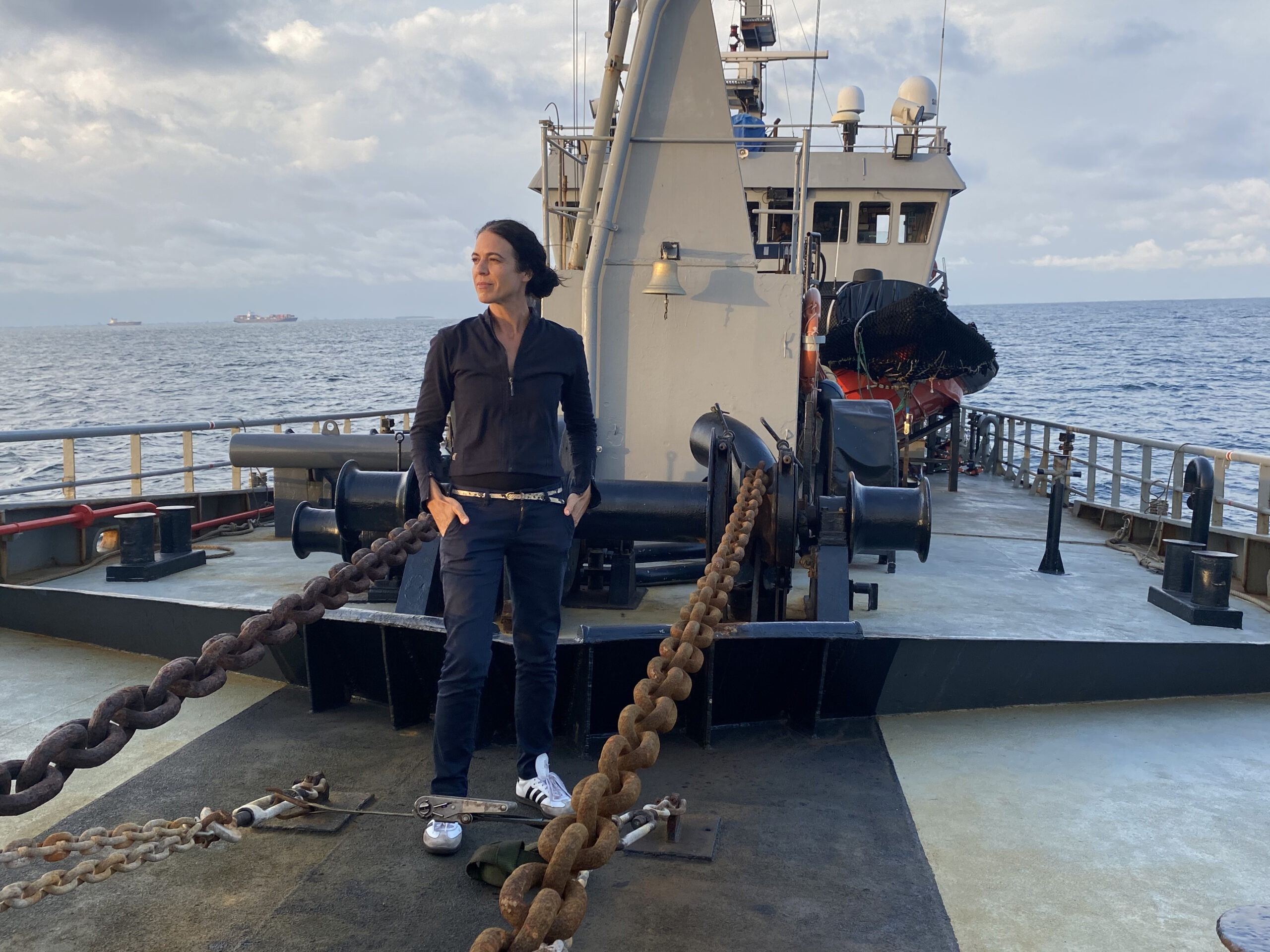 Shana Mabari aboard the Sea Shepherd Global vessel “Bob Barker,” 2020
The Bob Barker was so named because of a multi-million-dollar donation
the famed broadcaster donated to the organization.
(photo by Tara Lambourne)