Tanja Rector | You Can Get There From Here 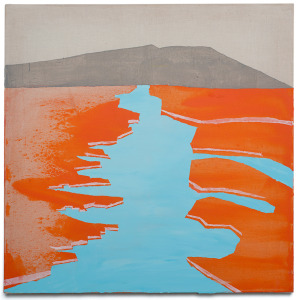 Continuing on the themes of her 2013 and 2014 exhibitions Travels, Rector’s body of landscape paintings are inspired by her many road trips throughout the United States and rendered in a warm, yet sparse, style. Her combination of paint, sewn canvas and collage, at first glance, seem to have a mosaic constitution that belies the delicate and transparent material that she utilizes. Created with minimal paint on raw canvas, linen and muslin the structure of the framework is visible in many of the pieces adding to the painting’s geometric layers.

The water, roads and rocks in Rector’s works explode and divide the landscapes like angular fault lines. While the stark geometry of canyons, mesas and immense stretches of sand are subtly implied by the canvases’ negative space. The result of these divergent elements is a body of work that represents the American topography with all of its contrasts, tones and beauty.

Tanja Rector was born in 1966, in Amsterdam, Holland. She has exhibited widely in solo and group shows across California, Texas, New Mexico, New York and Frankfurt, Germany. Her work has also been featured in numerous publications, including the LA Times, Beau Monde Magazine, Viva Magazine and LA Weekly.