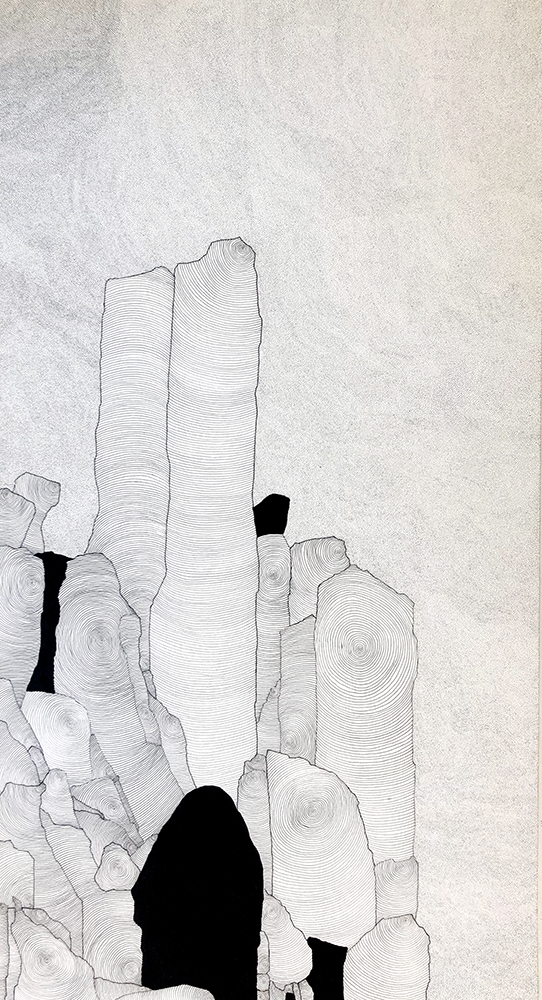 Porch Gallery Ojai presents Towers & Walls: New Works by Sally England and China Adams. The structures that surround us often become so enmeshed into our visual environment we can take for granted their functional importance. Respectively, vessels that hold and distribute diminishing water supplies and a giant barrier that naturally prohibits intruders; towers and walls have become symbols of political lighting rods in contemporary politics. With meticulous craftsmanship, both England’s and Adams’ works pay tribute to the structural beauty of their subjects with a nod to the important roles that they play in our society.

Sally England’s fiber sculptures are inspired by the water towers that inhabited her midwestern childhood home. Like Bernd and Hilla Becher’s photographic series featuring water towers, her sculptures highlight the diversity of the subject’s architecture. By scaling down the gigantic steel structures and rendering them in cotton rope, England removes all context and functionality of the buildings, pairing them down to a simple matter of form.

Initiated during a 2016 residency in Joshua Tree, China Adams’ rock wall series plays with the visible and hidden zones of the area’s famous rock formations. Created with economical, stylized lines, the works showcase the hills’ stoic beauty and mystery. Rocks that climb up the paper, overlap each other, and are completely hidden in shadow; Adam’s interpretation of nature highlights the walls acting as both a fortress and hideaway.

Sally England is a fiber artist currently living and working in Ojai, California. Raised in the Midwest, she received her BA in Communication Arts from Grand Valley State University in West Michigan, and later attended PNCA’s Applied Craft & Design MFA program in Portland, Oregon. Attending graduate school in 2011, she further explored soft sculpture and explore a new form of macramé (knot-based textile construction). Her large-scale macramé work, using thick cotton rope, became a catalyst for the recent revival of the craft and inspired many others to explore the art of knotting. Her fiber-based sculptures have been presented in exhibitions and installations in the U.S and abroad, as well as in online and print journals. In 2016 she had her first solo exhibition at The Grand Rapids Art Museum, titled ‘New Knots.’

China Adams is a conceptual artist whose multi-media work probes issues of reusability and consumerism. In addition to her conceptual work she maintains a strong drawing practice. She has exhibited internationally, and has had several solo shows at Ace Gallery, Los Angeles, Steve Turner Contemporary, Los Angeles, and The Porch Gallery, Ojai. Public collections include the Berkeley Art Museum, Orange County Art Museum and the Carnegie Art Museum.

Born in 1970 in San Francisco, Adams earned her BFA from UCLA and MFA from the University of Nevada, Las Vegas. Since 2009, she has been a lecturer at USC Roski School of Art & Design. As a curator, Adams’ themed exhibitions have received critical acclaim.

As a logical progression in non-object-based conceptual art making, Adams is currently exploring positive energy as an art medium.